While clarifying Ali Zafar’s allegations one by one, Meesha revealed and maintained her stance on her controversial harassment case against Ali Zafar.

Meesha confessed in the show that she thanked Ali Zafar and the organizers on a Whatsapp group created for their jam and concert coordination.

I was cordially exiting the group. The group was made by organizers for logistics and coordination.

She admitted to Khanzada on the show that she did send the exact message that he read out to her.

However, she also made it clear that her thank you note was about the concert and the kind words Ali had said about her at the concert.

She had not intended to thank him for the jam session that she claims to be harassed at.

He (Ali) said some great things when we were on stage and the audience was there.

“When truth is hurled against falsehood, falsehood perishes, for falsehood is by its nature bound to perish.” Quran 17:81 https://t.co/QmheCQfh8V

The singer and his lawyer maintain that Meesha was expressing gratitude for the jam session they had together. 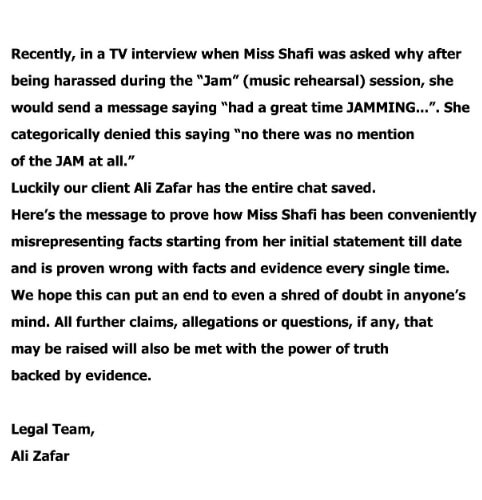 Ali Zafar has appeared in various talkshows and it seems this controversy will not die down anytime soon. His wife, Ayesha Fazli has also warned Meesha that the family will make sure this matter is brought to book.

This is a developing story.

The story was first published on Brandsynario.

Pakistani Celebrities Who Dared to Bare it All [Pictures]