Pakistan’s first transgender model and activist, Kami Sid has found herself in the eye of a social media storm and backlash for reportedly threatening a number of influencers.

The model claims that these social media users are openly ‘defaming’ her.

Here’s What Has Happened So Far! 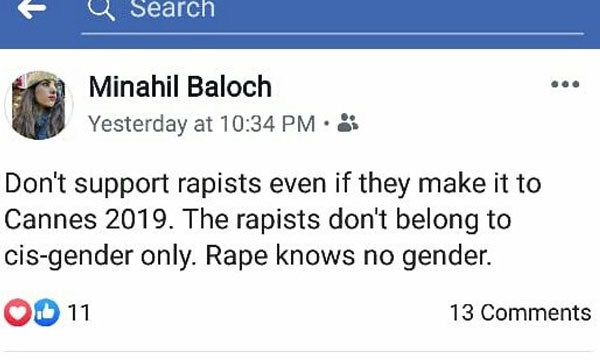 Later, she shared screenshots of her conversations with Kami to prove how Kami threatened her.

With a heavy heart, I'm writing this, that i am being threatened by trans model kami sid for making a post about something where i haven't named anyone, while the community is marginalized itself, everyone should be held accountable for their actions regardless of their gender. pic.twitter.com/rb1FXzH4oV

“My post has nothing to with her and her making it up to cannes. It’s not the first time she is threatening anyone, I’m making this public and if anything happens to me i want everyone to know it’s kami sid. Whatever i do in my personal life, my opinions have nothing to do with my university. Before she talks to my university authorities, i will be talking to them. Enough is enough.”

My post has nothing to with her and her making it up to cannes. It's not the first time she is threatening anyone, I'm making this public and if anything happens to me i want everyone to know it's kami sid. .

Now rape allegations on Kami are taking social media by storm after Minahil further exposed her.

The entire story. It was posted anonymously on a secret Pakistani group. pic.twitter.com/kfr9BezqNP

Minahil Baloch, who goes by the handle @surkhminahil, is a film student and blogger who recently became popular for filming and sharing her experience with a bike hailing service.

Baloch was recently also able to harness her social media influence to crowdfund a motorcycle for herself.

Thank you for making this happen everyone. pic.twitter.com/oRjCtZfkUM

Following that, other influencers began opening up about their thoughts on the case.

For the first time in years and that too at great personal risk I will be making this public that a well known transgender activist and model Kami Sid from Karachi is a child molester, sexual harasser and rapist… https://t.co/6EwxCxmJtJ

I considered #KamiSid my idol, I had a lot of respect for her and previously worked (voluntarily) with her too but as I wasn't comfortable with her exploitative ways back in 2017 and confronted her she continued to harass me whereever I went (Cont)

Another one of the people reportedly threatened by Kami is Shumaila H. Shahani, a feminist lawyer, and researcher.

Since this information came out of the trans community and reached feminist circles Kami has been threatening everyone into silence. The purpose of this post is just to inform Kami Sid that things that are public knowledge will be talked about and defamation does not apply here.

The Story behind the Allegations on Kami Sid:

It has been reported that Kami Sid and her partner Sid are being accused of a rape case that took place around 5 years ago when the victim was 14 years of age.

The accuser was a transwoman herself had shattered the silence by taking the complaint to her guru, who confronted Kami to resolve the matter.

The story circulating on social media reveals that Kami paid a sum of 10 to 15,000 to the guru as compensation.

The Storm is Jeopardizing the Already Marginalized Trans Community

The social media storm is upsetting many of Kami’s (former) supporters, as it is causing further damage to the already marginalized transgender community.

kami sid turning out to be problematic does not give you an excuse to discriminate against, or verbally/physically abuse, transgender people; nor does it give you leeway to pass generalised statements on the transgender community.

However, people are also pushing forward the narrative that a problematic act by one transgender person should not speak for or define the entire community.

With all of the disturbing details that have come to light regarding Kami Sid and her partner, it is important to know that the single action of one individual are not representative of the trans* and LGBT community as a whole.

What do you think?

Let us know in the comments.