The news of Kareena Kapoor’s pregnancy caused a wave of excitement to wash over Saifeena fans. And now, as her due date nears which is suspected to be December, many cannot wait to hear of her baby’s potential name.

This lady-boss looks amazing nowadays, rocking the maternity look although she is heavily pregnant and simultaneously working. She has seriously upped her fashion game as well, astounding crowds with her effervescent glow and chic style. It seems as though she has taken a page out of Kim Kardashian’s book and is really playing around with her looks instead of just lounging in comfortable sweats, which is actually what the average pregnant lady does. 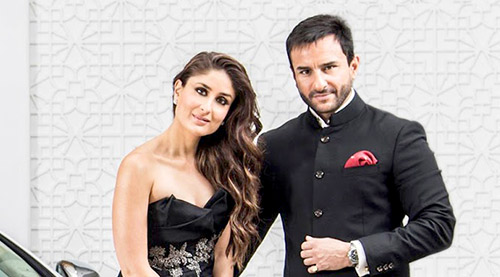 Recently, the gorgeous starlet was featured on Neha Dhupia’s radio talk show, ‘#NoFilterNeha’ and discussed some possible baby names that she had conjured up with her husband. She said, “Right now, obviously we haven’t locked a thought or anything. But yeah, Saif is more of a historian because he reads so much.”

Guess we all will be expecting a unique, old-fashioned name as opposed to something modern. Although, when Neha recommended ‘Zeus Chanel Kapoor Khan’, Kareena wasn’t completely repulsed by that suggestion and responded with the words, “You never know.”

Saif Ali Khan had only just debunked all rumours of the two naming their child ‘Saifeena’, stating, “To quell all the rumours, I want to let everyone know that we have not yet had our child and we still don’t know the sex of the child. We will not be having our child in London and the name of the child will definitely not be called Saifeena.”

Looks like we won’t be able to get a name out them very soon, but December is close so let’s see!